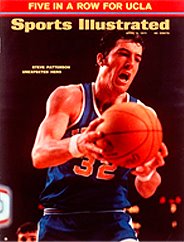 Steve and Carlette created Patterson Sports Ventures (PSV) in 1999. As CEO, Steve built a company dedicated to cause-related marketing and strived to make a difference in the world of sports. Steve died of cancer July 28, 2004. PSV is Steve's legacy and Carlette continues their work, building the agency and its properties.

All the while, Patterson had been coaching youth basketball (his kids and other people's kids!) at Valley Luthern High School, Boys & Girls Clubs and Agape Club Basketball including his now two adult sons, John and Brent, and three daughters, Amanda, Sara and Makena. He was also very active in youth and young adult ministries.

Steve was a member of three NCAA Championship basketball teams at UCLA from 1969 to 1971 coached by the legendary John Wooden. He was the eighteenth player taken in the 1971 NBA Draft and played four years for the Cleveland Cavaliers, one year for the Chicago Bulls and one year in the Italian Pro League.

While in the NBA, he served for three seasons as team Player Representative to the NBA Players Association.